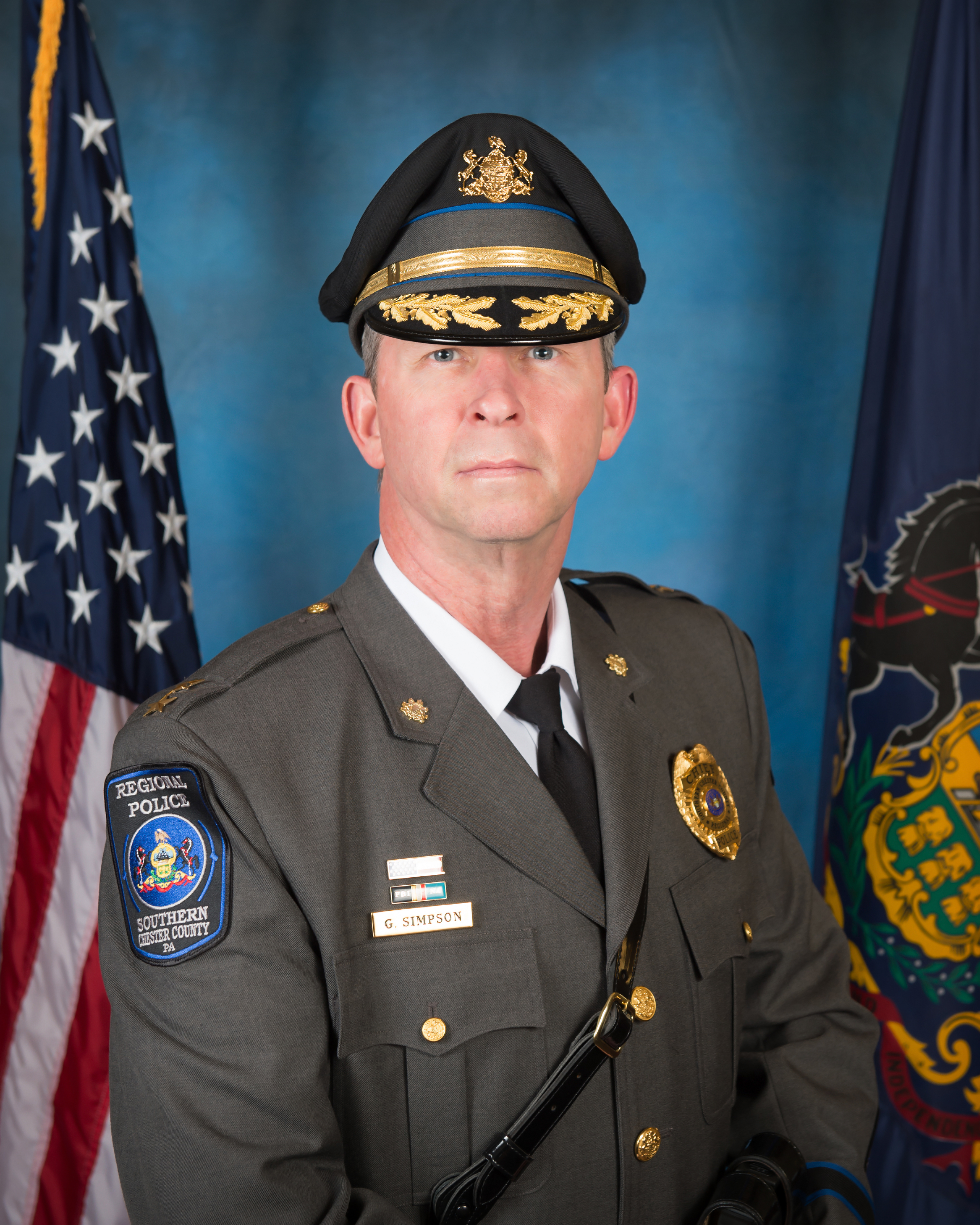 Chief Gerald R. Simpson’s law enforcement career began on September 12, 1983 when he entered the Delaware County Municipal Police Academy.  After graduating in December of 1983, he was employed by the West Grove Borough Police Department.  In October of 1986, at age 23, he was asked by the Mayor of West Grove to consider serving as the borough’s Police Chief.  After giving the Mayor a one-year commitment, he served in the Chief’s position for approximately 16-months.

On July 6, 2008, Chief Simpson entered the 234th Session of the FBI National Academy in Quantico, VA.  Interestingly, graduating on September 12, 2008, exactly 25 years after beginning the police academy.  After a commendable 23-year plus career with the Newark Police Department, Chief Simpson retired as a Lieutenant on December 10, 2010.

On December 13, 2010, Chief Simpson took his Oath of Office as the Police Chief for the New Garden Township Police Department.  During his introductory speech, Chief Simpson identified his goals of establishing a professional policing culture.  Chief Simpson expressed his dedication to working with community and regional stakeholders to build alliances to seek solutions in an environment of communication and collaboration.

In November of 2012, Chief Simpson received a letter of commendation from the Chester County District Attorney, Mr. Thomas Hogan, for leadership and innovation for advocating for the Pennsylvania Gang Law aimed at combatting gang recruitment.

In the fall of 2014, under Chief Simpson’s guidance, the New Garden Township Police Department was recognized for its efforts to address Domestic Violence by creating a model policy for the Lethality Assessment Protocols.

In January of 2015, Chief Simpson was awarded the 2014 Chester County’s Law Enforcement Officer of the Year from the Chester County District Attorney’s Office for his guidance and work on Active Threat Response and Preparedness for law enforcement training and policy.

In the spring of 2019, Chief Gerald R. Simpson attended the prestigious Command & Leadership Academy, founded by the New Jersey State Association of Chiefs of Police in 1993.  After 14-weeks of academic challenge, Chief Simpson graduated and was invited back to instruct in the program.

On September 21, 2019, Chief Gerald R. Simpson remarked at the official opening of a 12,000 sq./ft modern police facility for the Southern Chester County Regional Police Department, that the aforementioned achievements found success by thoughtful design, communication and cooperation with stakeholders, but most of all --- timing.  Hard work, communication, collaboration, etc. are vital pieces to success, but will only get you so far.  The timing of political will, dedicated managers and elected officials willing to confront obstacles teamed with a police chief unafraid of work to get this endeavor completed.

Chief Gerald R. Simpson has served on the Chester County Police Chiefs Association Executive Board beginning January of 2015; he presently serves as the 1st Vice President.  Chief Simpson was recently approved by the NJSACOP Executive Director, to open a Chester County site for the Command & Leadership Academy where he will serve as lead instructor and coordinator.

Chief Simpson resides in Chester County Pennsylvania with his fiancé, step-children and canine companion, Maverick.  Chief Simpson has three adult children all serving their Nation either in the US military or law enforcement and six grandchildren.  In his spare time, Chief Simpson is an avid outdoor enthusiast who enjoys mountain biking and hiking.  In 2016, he summited the second highest mountain (Mt. Elbert, 14,433') in the continental United States.