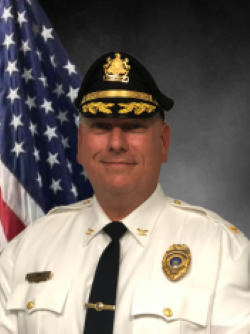 Chief Holdsworth worked in the patrol unit of KSPD for the first year prior to helping establish and participate in the first ever dedicated Narcotics Unit for KSPD in March of 1999.  Chief Holdsworth spent time in a detached position working joint undercover narcotic operations with the VICE/BDLE units of the Pennsylvania State Police prior to coming back to a patrol assignment with KSPD in 2000.

Chief Holdsworth was promoted to the rank of Corporal in May of 2001 and placed in charge of Patrol Operations.   Chief Holdsworth received several awards and acknowledgements for outstanding service while serving as Corporal for 15 years.

Chief Holdsworth was assigned Officer in Charge of the KSPD in March of 2016 prior to being promoted to the rank of Lieutenant in July of 2016.

Chief Holdsworth was promoted to Chief of Police in April of 2017.

Chief Holdsworth was elected to begin serving on the Executive Board of the Chester County Police Chiefs Association in December of 2018 in the position of Member at Large and in December 2020 as 1st Vice President of the Association. 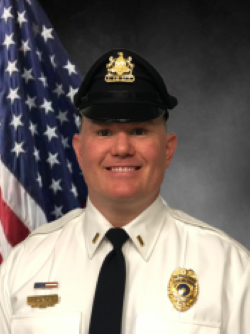 The Kennett Square Police Department hired Lieutenant Kenneth Rongaus as a part-time officer in August of 2006, before being employed full-time in May of 2007. Lt. Rongaus was assigned to the patrol division until 2016, when he moved to Criminal Investigations. Lt. Rongaus was promoted to Detective Corporal in 2018, where he oversaw the department’s criminal investigations. In July of 2021, he was promoted to the position of Lieutenant and is second in command of the police department overseeing police department operations. Currently, Lt. Rongaus is assigned to the FBI’s Violent Crimes Task Force.  In his time with the Kennett Square Police Department, Lt. Rongaus has served on the Chester County Major Incident Response Team (MIRT), The Chester County Regional Emergency Response Team (Swat), The Municipal Drug Task Force (MDTF). Lt. Rongaus enjoys cooking, working out, camping, and spending time with his family in his spare time. 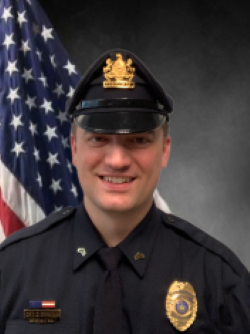 Corporal Christopher Gravina has been with Kennett Square Police Department since 2011 and obtained the rank of Corporal in 2020. He is currently the supervisor assigned to the Criminal Investigations Division.  Corporal Gravina has a strong computer and IT background and investigates the department's more complex and severe crimes. In addition to his role as a supervisor, he is a specialized task force member with the FBI's Violent Crimes Task Force and Chester County Detectives Internet Crimes Against Children Task Force. In addition, Corporal Gravina enjoys cooking, doing home improvement projects, and spending time at the beach with his family in his spare time. 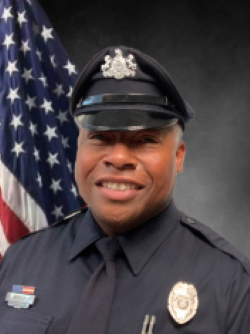 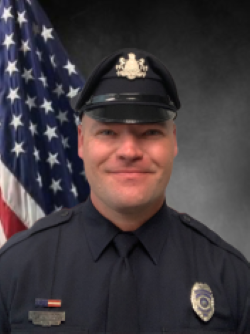 Officer Mark Todd started a career in law enforcement in 2010 and has been employed by the Kennett Square Police Department since 2016. Ofc.  Todd is currently assigned as the department's Commercial Vehicle Safety Unit and patrol.  Ofc. Todd enjoys spending time outdoors with his family, dogs and goats. Ofc. Todd’s hobbies are welding, hunting, and restoring old machinery and tools. 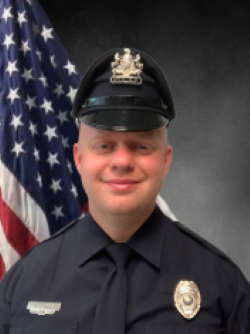 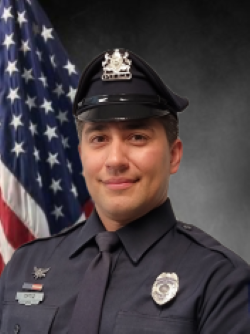 Officer Johnathan Ortiz has been employed with the Kennett Square Police Department since 2012.  Ofc. Ortiz is a Kennett Square native and the son of a local mushroom grower. He graduated from Bishop Shanahan High school in 2007 and attended Goldey Beacom College for two years before attending the Delaware County Community College Police Academy.  Ofc. Ortiz is currently assigned to patrol and is a Chester County Emergency Response Team member. He also serves as a firearms instructor and field training officer for the police department. Ofc. Ortiz enjoys spending time with his family, long walks with his dog, taking long trips on his motorcycle, and attending and entering car shows with his brother. 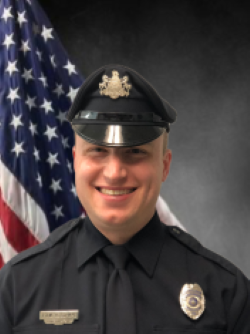 The Kennett Square Police Department has employed Officer Alex Schwab since 2017. Ofc. Schwab grew up in Delaware County and graduated from Springfield High School in 2005. After graduating from Temple University, Municipal Police Academy in 2014, Officer Schwab was hired by SEPTA as a Transit Police Officer in 2015. Ofc. Schwab is currently assigned to patrol and is the department's less-lethal arms instructor and a field training officer.  In his free time, he enjoys spending time with family and friends, outdoor activities, and watching sporting events. 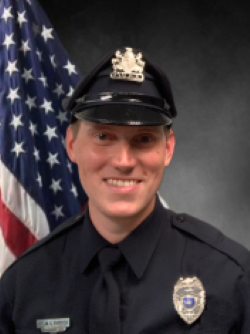 Officer Chris Parrish began his law enforcement career in October 2011 following graduation from the Delaware County Police Academy. Ofc. Parrish graduated in December 2011 from the University of New Haven with a Bachelor of Science in Criminal Justice, with a focus in Law Enforcement Administration. He began to proudly serve with the Borough of Kennett Square Police Department in July 2018. He has previously worked for Main Line Protection Services, the George W. Hill Correctional Facility, and Septa Transit Police Department. Officer Parrish enjoys spending time with his family, walking his dogs, traveling, woodworking, and exploring new places in his free time. 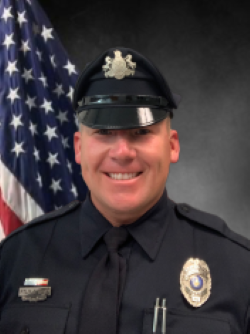 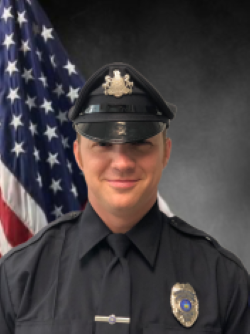 Officer Cole Burkhart has been employed with the Kennett Square Police Department since 2021.  Ofc. Burkhart grew up in Chester County and graduated from Octorara High School in 2011. After High School, he attended Delaware County Community College and graduated from the police academy in 2016. Between 2017 and 2021, he worked as a part-time police officer for multiple agencies, including Parkesburg Borough, East Whiteland Township, and Downingtown Borough. In his spare time, Ofc. Burkhart likes sports, anything outdoors, and hanging out with friends. 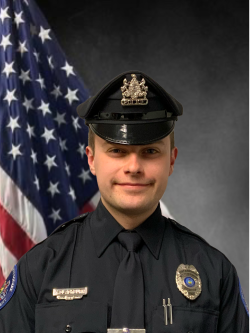 Officer Kyle Blackburn has been employed with the Kennett Square Police Department since March 2021 and is currently assigned to patrol. He is a 2017 graduate of Kennett High School and studied Aerospace Engineering and Physics at Embry-Riddle Aeronautical University before attending the Delaware County Municipal Police Academy and graduating in 2020. Ofc. Blackburn enjoyed contact sports and martial arts and was a competitive épée fencer for eight years before playing rugby in college. He now trains in Brazilian Jiu-Jitsu and in his free time is an avid woodworker and guitarist. 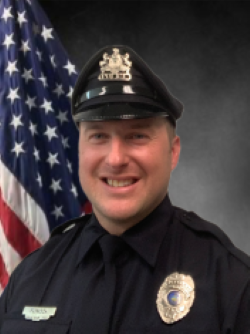 Officer Justin Fonock has been in law enforcement for 15 years. In his time as a Police Officer, he has obtained multiple certifications and extensive training in all aspects of the job. He is a certified Field Training Officer. Officer Fonock has received several officer awards and commendations for both lifesaving and exceptional police work throughout his career. Ofc. Fonock was awarded a State Commendation for his community service in 2019.  He enjoys work with the community and the positive outcome it can have. Ofc. Fonock is fan of golfing and watching the Phillies and Eagles. He enjoys spending time with his family and friends when he is not working. 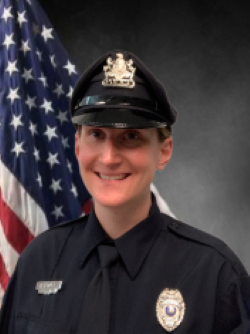 Officer Rebecca Sousa has served with the Kennett Square Police Department since 2019.  Ofc. Sousa grew up in Delaware County and graduated from Upper Darby High School in 2010. Additionally, she graduated from the Delaware County Municipal Police Academy in 2018.  Ofc. Sousa is currently obtaining her associate degree in Administration of Justice. She enjoys traveling and spending time with her friends and family during her off time. 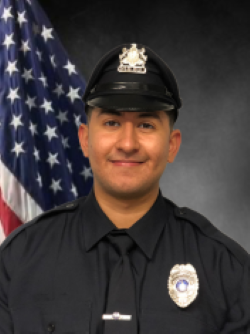 Officer Luis Lopez-Torres grew up in Chester County, where he graduated from Kennett High School in 2015. He then graduated from the Pennsylvania State University with a Bachelors’ degree in Criminology and a Bachelors’ degree in International Politics. In July 2020, Ofc. Lopez-Torres attended the Delaware County Municipal Police Academy and graduated in December. Since then, Ofc. Lopez Torres has been employed with Kennett Square Borough Police Department and is assigned to patrol. He enjoys being outdoors, working out and spending time with family and friends in his free time. 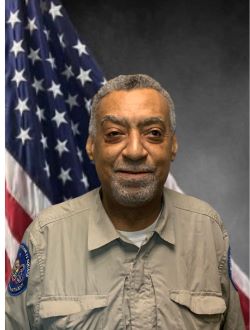 Parking Enforcement Officer Andrie Davenport has been employed with the Kennett Square Police Department since 2007. Andrie also works for the Red Clay Room, where he manages the audio and visual equipment for events. Andrie loves all sports, especially the Philadelphia Eagles and 76ers. In his spare time, he enjoys spending time with family and friends. 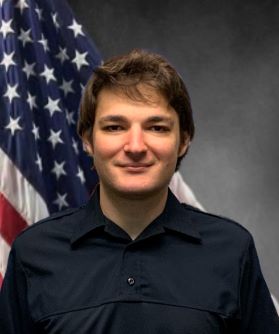 Parking Enforcement Officer Jared Carbone grew up in various areas of the United States before coming to Kennett Square and calling it home. His favorite activities are nature hikes, swimming, cooking, building/repairing, time with friends and family and serving communities everywhere he goes, including being a founder of the community service club in High School. He has worked in many different fields from construction to retail, food preparation and animal care prior to his employment at Kennett Square Police Department, where he strives once again to serve his community as much as possible. 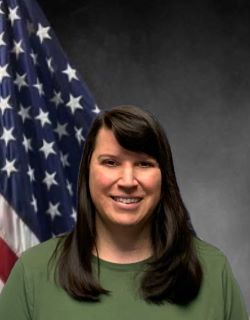 Tricia Jones is the Administrative Assistant to the Chief of Police. Tricia began her employment with Kennett Square Police Department in 2018. In addition to assisting the Chief, she is the main point of contact for the public during any police related business in the Police Department lobby as well as incoming telephone calls. Tricia works closely with the Parking Enforcement department and the overall functioning and development of our parking system. Tricia attended Goldey Beacom College for Business Administration. Tricia's career in office administration has been diverse, to include banking, publishing and construction companies. Tricia is married and has a daughter. She is a proud MomMom to her beautiful granddaughter. Tricia enjoys spending time with family and her two Labrador Retrievers. 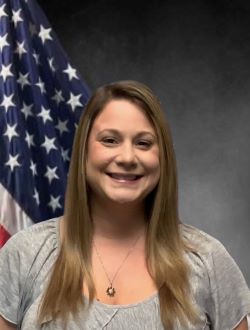 Nicole (Nikki) Puoci has been employed with the Kennett Square Police Department, as their Records Administrator, since 2018. Nikki is a lifelong resident of Kennett Square and graduated from Kennett Square High School in 2006. Nikki attended California University of Pennsylvania, studying Business Management, and was formerly a manager at Victoria's Secret and Lenscrafters prior to her employment at KSPD. In her free time, Nikki enjoys traveling and spending time with her family, friends and fur babies.